Another 10 places you can easily visit in one day This unique 336-metre S-shaped pedestrian bridge is supported by two cables that are 45 meters high from two 48-degree outward angled steel towers topped out with stylized hornbills, denoting the emblem of Sarawak.

It connects Kuching City North with the southern part of the city, providing an alternative route to the residents of both areas. The bridge connects the two parts of the city. The idea to build the bridge reflected what we see in the olden days when we witnessed the beauty of Kuching 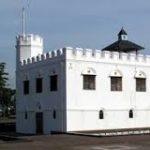 Built in 1879, once guarded the river against marauders. Over the past century, the structure – still emblazoned with Sarawak’s Brooke-era coat-of-arms – has served as a prison, a mess and a dance hall. Currently it hosts a dinner-only restaurant. 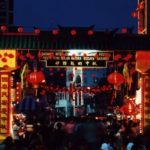 is marked with a grandiose Chinese-inspired red archway that certainly indicates the entry point of this popular shopping and eating place. The refurbished old shop houses are surprisingly nice to look at, with brightly painted walls and windows, garbage-free streets (yes, most parts of Kuching are surprisingly clean!) with no moving vehicles crowding the alley ways. 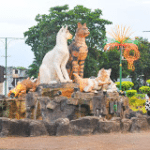 Kuching sounds a lot like the Malay word for ‘cat’ and hence cats are the city’s mascot. This is a particularly nice cat statue and a popular photo It traces the history of the Chinese community in Sarawak. Exhibits include the early trade routes, initial migration from various regions of China, geographical distribution, the early pioneers, traditional trading activities, the formation of trade and community associations, political history and the involvement of the Chinese community in modern, multi-racial Sarawak. The museum was formerly the headquarters of the Chinese Chamber of Commerce in Sarawak. At present, the building houses many artifacts of past eras and contains many memorabilia of Chinese affairs during the time of Charles Vyner Brooke who is popularly known as the White Rajah in Sarawak history. 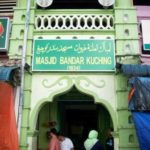 Unlike many mosques in the city, the Masjid Bandar Kuching or Masjid India (Indian Mosque), the oldest in the State,  is inconspicuous. It’s sandwiched between busy shop houses at India Street and Gambir Street.To enter the mosque, you traipse through a narrow lane at India Street, or through its main entrance at Gambir Street. Both lanes are between shops. It’s an aromatic grand entrance for the visitor who gets a whiff of the spices on sale.Built in 1837, the mosque was built by Indian Muslims who originated from southern India. Originally, the walls and roof was made of nipah palms. In 1876, belian wood planks replaced the nipah palms walls. Later, the floor was cemented. showcases authentic textiles made by the main ethnic communities of Sarawak. Visitors follow an exhibition flow of how a finished product such as weaving came about. Also on display are contemporary work of designs based on traditional weaving and design techniques. Traditional costumes and fashion accessories used in ceremonies are also on display. The architecture is an attraction in itself. It is a combination of English renaissance and colonial theme. Rectangular in structure, the Pavilion Building as it is known, was first constructed in 1907 a medical center. The 3-storey building later became the headquarter of the State Education department. The museum opened and August 2005. The first phase of the Upside Down House Kuching is mainly an upside-down house with all the furniture and interiors installed ‘upside down’. Kon came up with the idea and design for the house and the items were sourced from various local furniture shops. They also managed to get local contractors to help set up the whole place. 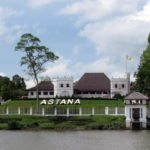 is a palace in Kuching, Sarawak, Malaysia, on the north bank of the Sarawak River, opposite the Kuching Waterfront. It is the official residence of the Yang di-Pertua Negeri Sarawak, the Governor of Sarawak. The name is a variation of ‘istana‘, meaning ‘palace‘.[1] It was built in 1870 by the second White Rajah, Charles Brooke, as a wedding gift to his wife, Margaret Alice Lili de Windt. The palace is not normally open to the public, although the landscaped gardens are, which can be reach by a boat ride across the Sarawak River or via new Darul Al-Hana Bridge. 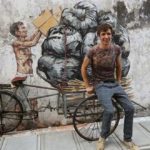